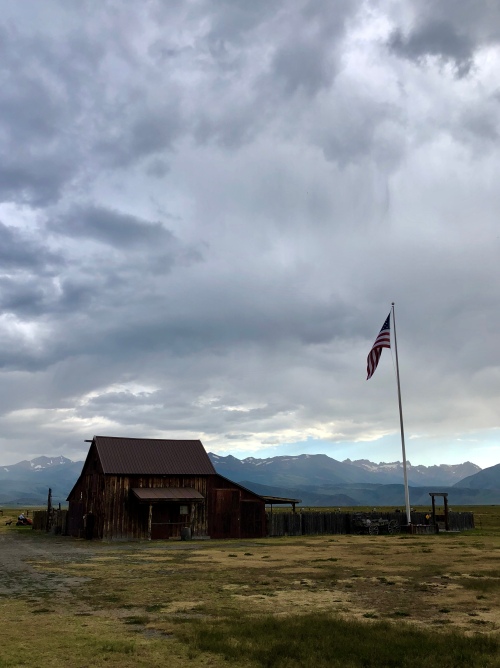 I’m sitting on the lawn of the Silver Maple Motel in Bridgeport. It’s early and the sky is blue with the rising sun lighting up the scattered clouds. There is an owl and chick in the trees nearby causing a ruckus with the other avian species. It is comfortably cool and I have a thermos mug of coffee at hand.

Gretchen and I left Manhattan Beach yesterday, leaving the rest of the working family (and the dogs) behind. Our escape from LA took us up Highway 395 through Palmdale and Mojave, with the first tourist stop at Manzanar National Historic Site where Gretchen was visiting for the first time. It was only my second time to visit the site where the US government had incarcerated the Japanese during a dark period in WWII. The place is unsettling and a reminder how quickly our “rights” can be taken away. Something to think about given the current political climate.

While we were there, we encountered members of the Wakatsuki family. The eldest member present was the grandmother that had been interned (imprisoned) in the Tule Lake camp in Northern California. But they had come to see the list of names at Manzanar that included (I think) at least 8 family members that had been sent there. It was quite moving to see them pointing out the names that were included in the list. Gretchen was close to tears while witnessing the scene, and I wanted to somehow apologize to all of them for what the country had put them through.

Back in the car, our thoughts turned to lunch. Gretchen suggested that we go to Schat’s Bakery and Deli in Bishop. This was a place I had never visited. Inside there was a crowd, but the deli sandwich line moved pretty quickly, and we soon had our food. The turkey and swiss sandwich I picked was great and Gretchen’s tuna salad also looked good. Schat’s makes all of their own bread (and lot’s of other goodies) and there was a large selection to pick from. We only had the appetite to eat half of our sandwiches and saved the second half for today. The food was so good that I got back into the car and forgot to get gas (but that story later).

It was now time to leave the low desert of Bishop and head to higher elevations. The temps soon dropped into the high 80’s as we left the valley floor and the afternoon clouds gathered (there were flash flood warnings in LA County). We had decided to take the June Lake Loop and leave 395 for a short stretch. The little detour is beautiful once you get past June Lake itself. It takes you into a high desert canyon with trees and wildflowers. Jeep and I stopped the car a couple of times to score some wildflower pictures. 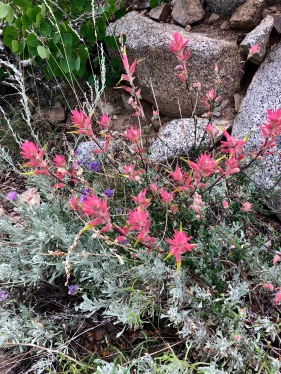 It was at this point that I noticed the gas was almost gone. However a quick check of the online maps showed us that Lee Vining was only 4 1/2 miles ahead, so we were ok. That could have been bad.

All gassed up now, we started the last leg to Bridgeport where we planned to spend the night at the Silver Maple Motel. Bridgeport is a small town, four blocks wide, about 6 blocks long, with Highway 395 running down the center. This place is an old school road trip motel built in the 40’s. I love place like this and think of all the travelers that have sat on the lawn like I am right now contemplating their next steps in life. South to LA, over the pass int Yosemite, place north? There are so many options when you are on the road. 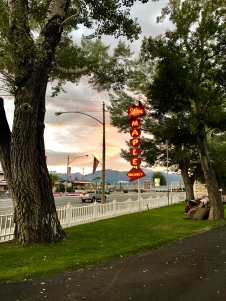 Last night we had a good dinner at the Bridgeport Inn a couple of blocks away. The food and service were both good and they had apple pie-ala-mode for dessert. What could be better? We walked around after dinner and admired the surrounding mountains. Bridgeport is a pretty place. I can see why somebody started a town here.

Today we are heading north to Chester CA outside Lassen Volcanic National Park.