Yesterday morning I got up around 5am and set off for the desert. I was armed with fresh coffee, a blueberry scone, and google maps to guide me. I followed the same route that I would take if going to Las Vegas, but this time I was looking for treasure of another sort in the sand and rocks of Johnson Valley CA (red pin in map).

I was headed towards 40 acres of land my Mom’s dad purchased in the mid’60’s. It took some sleuthing but I was able to locate it on the San Bernardino County Assessor’s website (Please read the first installment of this series in my post “The Lot in the Desert – 300 words”). It was purchased in the mid’60s as an investment, never sold, and is now an artifact in my family estate. My brother asked me to do some research to help him decide what to do with it. I’ve named it “Walker’s Folly”.

This land is just outside the Marine Corp Air Ground Combat Training Area in Johnson Valley. The southern part of the training area is shared use with the off-road vehicle crowd, but the land is controlled by the Corp and is closed periodically for training exercises. It was thought in the 60’s that this land would become valuable because of this proximity to the training area, either as housing for people coming to the area, or because the government might want to purchase it. That never happened.

The weather was overcast and dark as I left Manhattan Beach and the clouds didn’t clear until I turned off highway 210 and headed north, climbing out of the San Bernardino Valley on highway 15, towards Las Vegas. This seemed appropriate as it was the dream of potential riches that enticed my Grandfather to purchase this property in the first place.

Or so I thought. I was on Bear Valley Road heading east and I thought the sprawl would never end. Strip malls, urgent care centers, tattoo parlors, stop lights, and fast food. Miles of it. This is an area where I would think twice about voicing my left-leaning political views.

Finally clear of the debris, I reached highway 18 and started my route southeast. At the intersection of Bear Valley and 18 is an abandoned gas station. What was fun was that google maps indicated that the name of the road behind the station was “Deadman Saloon Road”. Completely useless fun fact.

There are always interesting things to see in the desert. I next passed what I think was the filming of a Honda Civic commercial (the things hanging from the crane appear to be letters spelling Civic in reverse). Anyway security wouldn’t let me any closer than this.

The rest of the trip into the town of Lucerne Valley was pretty uneventful. But the land was beautiful and much greener than I had anticipated.

Lucerne Valley is a very small town at the intersection of highways 18 and 247. At this point I needed to offload some of the coffee I had consumed and stopped at Pioneer Park. This turned out to be a lush, green, wooded lot close to the center of town. They had a town museum adjacent but it was only open by appointment.

Google was very clear about the next leg of my journey towards Walker’s Folly. But I stopped at a random place on the road to take some pictures of the early morning desert, and there was this other road right across the highway and Google indicated that it could be an alternate route. You look at the two roads and tell me which one looks more interesting.

I took the obvious choice, knowing that Google could be sending me to a desert dead end, and turned the RAV4 wheels towards the unknown. The route I eventually took is shown below with my amateurish markups.

Bob’s Desert Odyssey took a lot longer to accomplish than the easy path. But isn’t that always true?

The first stop is designated on the route map as the “Hilltop Hike”. It was past time to exit the auto and stretch my legs. This seemed like the right place.

The hike was great. The place, in spite of the litter at the base, was deserted, quiet, and clean. There were signs of an old jeep road going up to the top, and lots of plants and scenic rocks to look at. But no trash. It seems like the trash bearers can’t get past the parking lot. Too far from the beer. 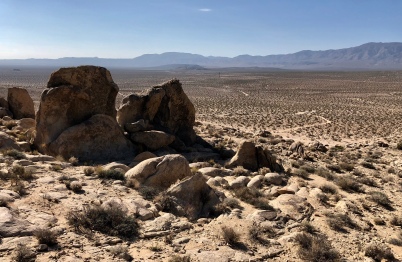 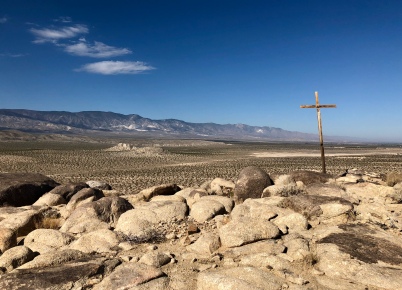 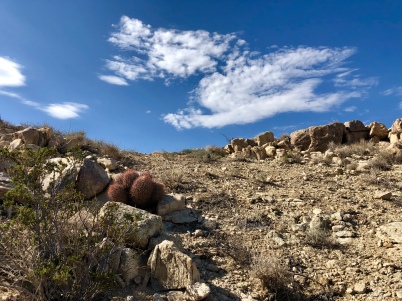 On the way back to the car I managed a decent panorama. The trash is lost in this view. What is it about the desert that makes people want to collect derelict cars and burn old mattresses?

My impression of the desert was that, in spite of the heat, and drought, there was plenty of green life. The landscape always looked almost verdant (ok, I’m exaggerating, but you will understand soon).

Back in the car, with Google maps fired up, I’m on my way.  My next leg starts with the slightly curved road in the middle-right of this picture.

This leg was the most challenging from an off-road perspective, and very slow going for my blue car. The hybrid RAV4 does have 4-wheel drive on-demand, and I never felt worried. But I was thankful for the feature. I would not have been comfortable without 4-wheel drive back there.

Eventually my route takes me out to the flats and around another large rock pile to the Soggy Dry Lake. The lake is part of the Johnson Valley Off-Highway Vehicle Recreation Area.

You may wonder why I took so many screenshots of the route. Frankly, I was expecting the cell service to disappear at any moment. So the screenshots were my backup for navigating, although I never completely lost contact.

These next pictures show why Google was so helpful out there for me. The land turned featureless, and flat, with no route, or road markings. I was literally following a blue line on my screen to the road. In fact you can see here where I had strayed off the straight and narrow as I rolled towards Bessemer Mine Road. I really was stopped here looking for where the road went.

I think I’ll stop here and present the final stage of this journey in the next post.

Until then, thanks for reading. Be safe, and don’t forget to vote.