Hooray for transition days. Today was a day to roll miles under the tires.

We started late in Cannon Beach heading towards Portland on Hwy 26 and then south on Hwy 5. Hwy 5 was crowded with trucks and cars. Being 2 lanes wide for most of the way, it was easy for things to get stacked up behind a rolling convoy of semis with trailers.

We stopped for lunch at a rest stop near Harrisburg OR. Scoring a shaded parking spot towards the southern end, we got out and stretched our legs. There were a number of picnic tables in the shade of a large grove of tall oaks.

Behind the grove of trees was an orchard being watered by a something like a huge rain-bird sprinkler. The sound it made covered the whine of the highway somewhat. 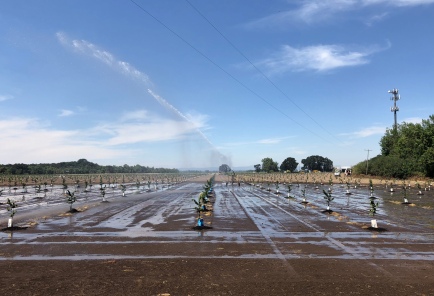 We quickly ate our roast beef sandwiches with pickles and mayonnaise, took a few pictures, and quickly got back on the road.

Soon we were coming into what looked like hazy overcast and Gretchen realized that there must be fires nearby. There were fires outside Medford, and a fire nearby Yreka, our destination this night. As we got closer to Yreka, it was clear that there had been a fire, but that it was now extinguished. 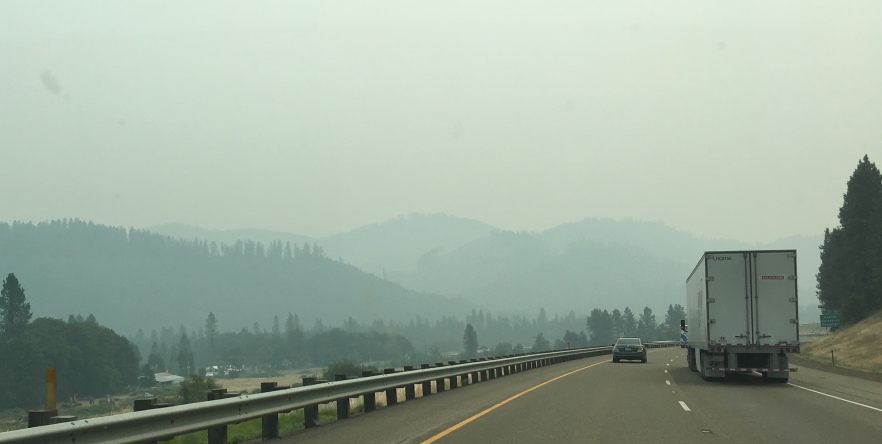 We quickly found our hotel, a Holiday Inn Express. We were glad to get inside out of the near 100 deg weather and into the air-conditioning. We are not clear of the smoke, but there is less of it now than we saw earlier.

After getting settled, and mixing myself a Gin and Tonic, we checked the internet for restaurants and found a small Mexican restaurant named Puerto Vallarta nearby with good reviews. We drove through the small downtown before returning to the restaurant to eat.

Yreka looks like a typical town where the highway used to go through the middle of town, but that is now bypassed by the freeway. Towns like that seem to have the look of a place that used to be prosperous, but that now have a veneer of decay.

The restaurant itself was nice inside, and we were soon seated and comfortable in the air conditioning. I had the Chile Colorado special with rice and beans, and Gretchen had a chicken taco, chile Relleno, and rice and beans. Both were really good. They also brought us a small dessert consisting of corn chips with cinnamon sugar and whipped cream.

Any way we are back at the hotel reading books and relaxing. Tomorrow we are headed to Santa Cruz to visit with Gretchen’s sister.