I woke up in Kernville feeling great. I slept until after 7am which is pretty much unheard of. I ate a leisurely breakfast at Cheryl’s Diner, went back to the room feeling full and energized, loaded up the car, and started north out of town on Sierra Way with the river on my left.

But, as I was passing Sierra South Mountain Sports, a fit of nostalgia overcame me and I decided to go in and look at what the watersports gear looks like now. Gretchen and I used to spend a lot of time in the Kernville area kayaking the Kern, and I had not been in that store for close to 28 years. I had fun talking to the people in the store, and I admired the gear. But, in the end, I only bought a shirt and a pair of pants that were on sale.

With that out of the way, I was really heading north, getting into the rhythm of mountain driving. Lots of curves, and up and downs. If you are not in a hurry, there is a certain zen  aspect of driving curvy roads like that. I settled in and listened to music by The California Honeydrops, a band my niece (Thanks Bridget!) introduced me to while doing ceramics a few weeks ago.

The sun was shining, the hills were golden brown, and there were glimpses of blue water in the riverbed every once in a while. Soon I was past Roads End, and Johnsondale, and making the turn north onto the Great Western Divide Highway, towards the Trail of a 100 Giants.

The Trail of a Hundred Giants is a large grove of sequoias with a trail running through it. The trail is only about 1.5 miles long and is wheelchair accessible. I had fun walking through and taking a few pictures. I also imposed on a friendly hiker to take my picture in front of the roots of a fallen sequoia. I’m pretty small in the picture. 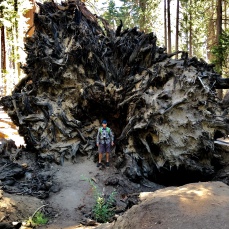 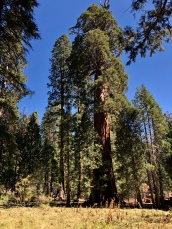 From there, I drove out of the mountains and back into the flats, before I started the climb into Sequoia/King Canyon Parks. Sometimes the golden grass plains of CA are really pretty.

It was time to find a place to camp for the night. I chose to stop at the Potwisha Campground, the first camping spot inside the southern border of the park. I found a nice level spot to park the car, and set up camp. I unpacked the air mattress, got it inflated, pulled out the sleeping bag to let it fluff up, and moved all of the bear attractants (food, sunscreen, etc.) to the bear box near the car.

Then it was cocktail hour, I fixed myself a gin and tonic, and sat down to finish reading Treasure Island. The drink was good, the weather fine, and the end of the book was fun and exciting to read. the only drawback were the number of bugs buzzing around eld at bay only by the repellant I spread on my hands and face.

Dinner was a pretty simple affair. I warmed up a can of chili, rounding out the meal with sourdough bread, dried apricots, and trail mix (with M&Ms). I started a new book, “The Thousand Autumns of Jacob de Zoet”, by David Mitchell. This is about a dutch clerk in 1799 Japan (I know, that’s a pretty brief description). The book so far is a fast, and interesting read. 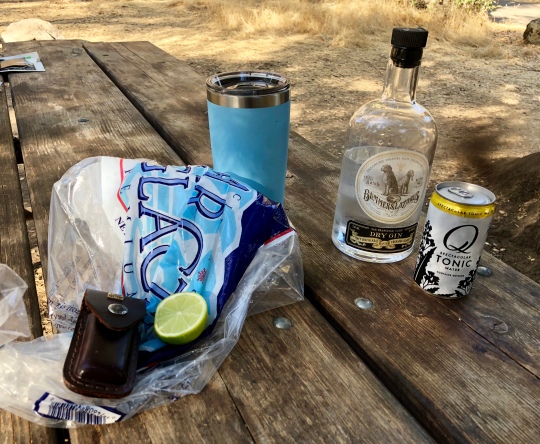 After dinner, I walked (hobbled, my knee was still wonky) to the banks of the river that border the west side of the campground. The river (large stream?) is the Marble Fork of the Kaweah River. Granite boulders lined the river with small drops and pools in-between. It was a beautiful place to sit and listen as the sun moved to the horizon. 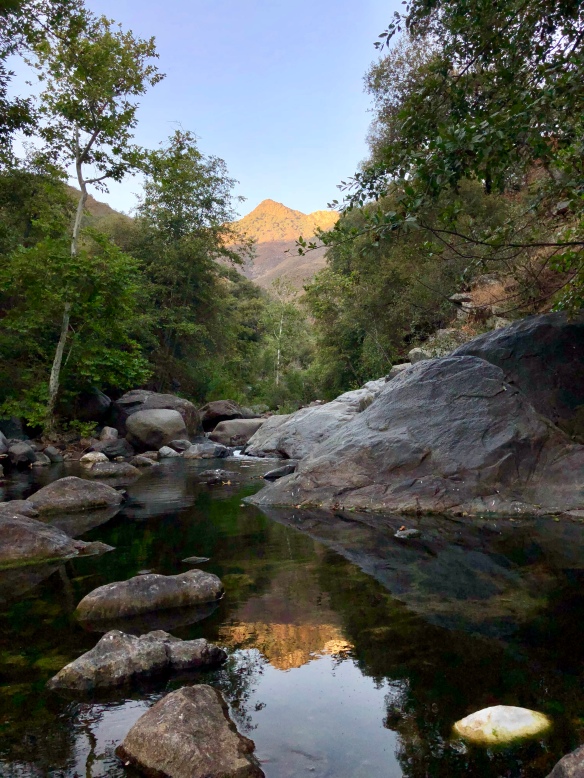 It seemed that the bugs disappeared with the sun. I crawled into my bunk, read for awhile longer and fell quickly to sleep.

That’s all for this installment. Be good to animals, and don’t forget to vote (My friend Jack told me I forgot this little bit in my last installment).