The road north from Potwisha into the park is under construction and closed to traffic until 6am. I woke early, made coffee, moved some snacks to the front seat, and broke camp. I was third in line for admittance up the road at 6am.

My plan today was undefined as I headed north. I hoped to find a real breakfast up the road and was not disappointed. Past the Lodgepole Visitor Center, was Wuksachi Lodge. They had a fine buffet breakfast, with all the usual foods, that I took advantage of.

Fully breakfasted, I drove back to the Lodgepole Visitor Center and looked around. I made sure to get my “passport” stamped, something I do at all National Parks (and some monuments). I also, figured out a plan for at least the first half of the day. As you’ll find out later, I pushed things a little too hard and my knee rebelled.

The plan for the morning consisted of visiting the General Sherman Grove and Tree, and then visiting the Crystal Cave. You must purchase the ticket at a Visitor Center or on-line for the cave. There are no tickets sold at the cave .

The Grove was mostly deserted (visiting after school starts is great). There was a 1.5 mile round trip hike to the grove, and back, from the parking lot. The trail is relatively steep both ways, but the knee seemed to handle it ok.

I discovered that it is hard to get a picture of a Sequoia tree that conveys their size and majesty. Not so hard, was to get this picture of the tourist-loving squirrel. Anyway I did get a few pictures and imposed on some german tourists to take my picture in front of the General Sherman Tree. I used my watch to shoot the selfie.

The distance by road from the Sherman Tree to Crystal Cave is about 13 miles, and 50 minutes. The road is narrow with lots of tight curves, and it takes longer to reach the end and Crystal Cave than it seems like it should. I was glad I had downloaded the area map into Google maps before I left so I could check my location and make sure I hadn’t gone the wrong way.

I got there a little early for my 11 am tour and hung out in the shade near the little gift store they have there. Eventually, one of the guides working there came out and gave us an orientation on proper cave etiquette and bat white nose syndrome prevention.

The white nose syndrome has not yet infected the local bat population and they are working to keep it from ever happening. This mostly consists of not wearing anything into the caves that has been in a cave anywhere before, and stepping onto a mat soaked with alcohol (?) to make sure the soles of our shoes are clean.

That done, it was a short 0.3 mile walk down to the cave entrance where we met up with the guide that was going to take us into the cave.

The cave was interesting, and the guide had fun, and informative things, to tell us about it. I did get a few good photos inside. I have included my photo of the formation that looked to me like a dwarf (as in the 7 dwarves). 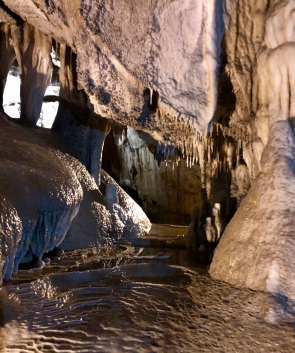 I recommend going to the caves if you are visiting and time permits.

I exited the cave and made my way back to the car by about half past noon. It was time to decide what to do with the rest of the day. After several false starts, I decided that my best choice was to travel to Grant’s Grove and find a place to spend the night.

I had heard that the lodge there had tent cabins renting for $70/night and that’s where I went first. The John Muir Lodge still had some tent cabin vacancies and I took one for the night. The cabins have no power or water (there are showers for your use), but they were clean, reasonably priced, and the beds were comfortable. The rule for bears was to place all bear attractants into your cabin for the duration.

It took me awhile to comply with the bear rules, as it required that I move the ice chest, food box, and suitcase into the cabin. It was still early enough that I walked the short distance to the Kings Canyon Visitor Center, and got my passport stamp.

That was it for the day. I ate a dinner of chili, bread, apples, and a gin and tonic, and retired to the tent to read and sleep.

That’s all for this day. Don’t forget to vote.