Road trips are all about a great breakfast. The Bob regulation road trip breakfast starts with black coffee. It must come soon and often. Next is the plate of sausage (usually), eggs over-medium, potatoes of some kind, and sourdough toast. Of course there is always room for regional favorites, or my mood. Saturday morning started with breakfast at the original Black Bear Diner in Mt. Shasta. I say the original because it is a chain and this was the first. 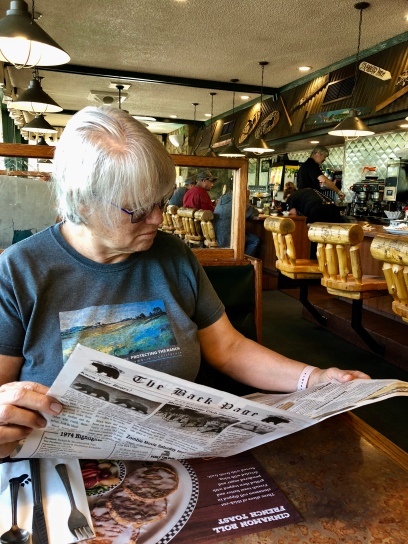 The breakfast met the specifications with the slight twist of spicy patty sausage. Gretchen had a waffle with fresh blackberries (waffles being one of her favorite dishes). The meal was perfect and launched us into a busy day.

We chose to take the Hwy 97 route to Eugene instead of Hwy 5. Both of us were surprised that our map app only penalized the Hwy 97 route 20 minutes. We spent some time discussing why you would ever go the other way. Hwy 97 turned out to be less crowded, more scenic, and afforded us the opportunity to swing by Crater Lake, a place I’ve never been. Along the way we were able to get a few great shots of Mt Shasta (the peak, not the town)

Soon, we took the turnoff to Crater Lake National Park. The road was mostly empty until we reached the park. A little surprising for a summer Saturday morning. The only congestion we experienced was at the entrance to the park where we once again flashed our lifetime pass (that is a great investment for us designated seniors, even at the price the feds just raised it to).

We reached the lake finally and had to maneuver through the parking lot to find a parking space. The parking gods were in our favor and we soon found a good spot. The lake is spectacular. The blue of the lake is something to see and makes Lake Tahoe seem just normal. There is not much else to say about the park. The lake is the focus and its reason for being. I have included a few of my pictures. We wondered how many billions of pictures have been taken over the years trying to capture the beauty of the place that are now lying in old boxes in dusty attics. 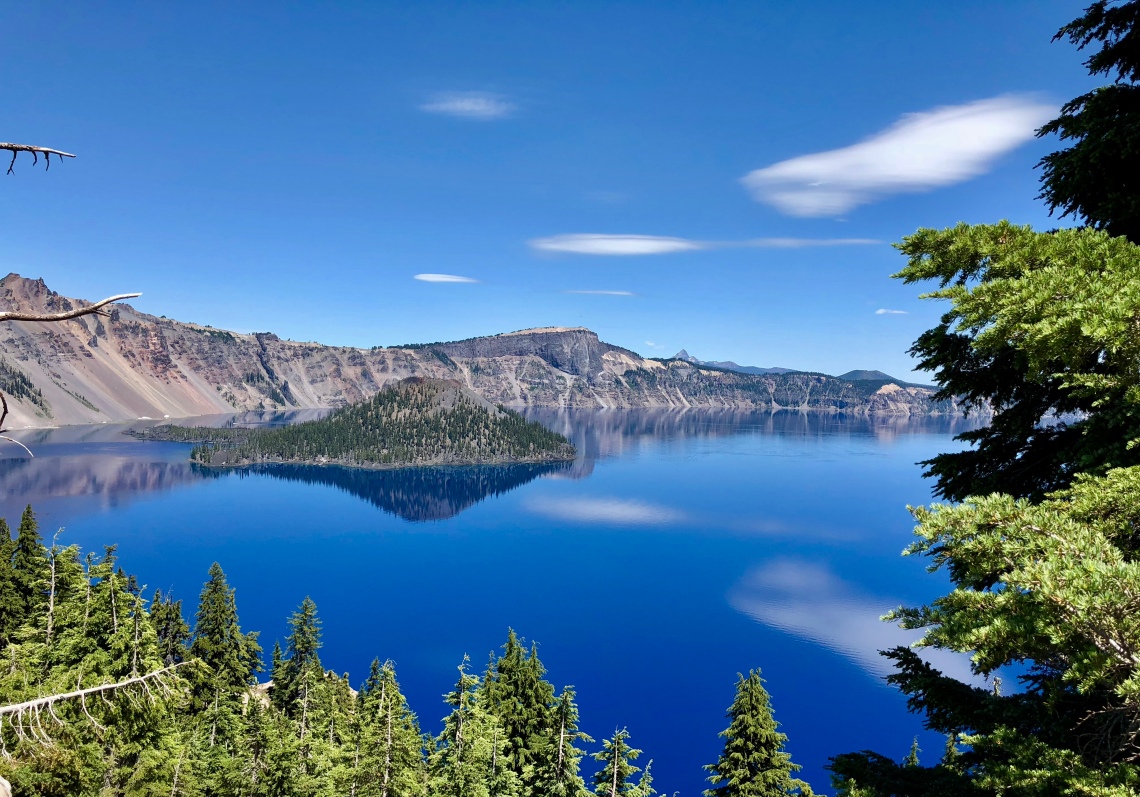 Soon we were on the road again, heading to the northern exit of the park and back to Hwy 97. As we approached the highway we started to see cars that looked like escapees from a Mad Max movie. We had stumble into something called The Gambler 500. In their words, “The Gambler 500 Rally is a navigational challenge based on fun, cheap cars, adventure and stewardship of the outdoors.” . We were unable to get any good pictures of the cars (Gretchen did capture this 4 photo sequence where it looks like there is a dinosaur in the co-pilot seat (you be the judge). Looks like a lot of fun. 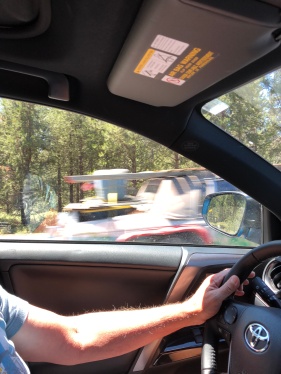 Back in the real world, we soon found our next to last stop (recommended by the young Oregon employee at a rest stop and my dental hygienist) Salt Creek Falls. This is a short stop, 30 miles outside of Eugene. Easy to walk from the parking lot and very pretty. 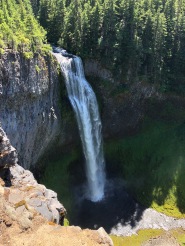 In Eugene we soon met up with our friend Steve Olsen. We were all in Eugene to  hear Caroline Olsen, his daughter, sing in the finale of the Oregon Bach Festival.  But first diner called and the three of us decamped to The Bier Stein in Eugene. This is a beer and food lovers paradise. Too many beers to chose from and the food was great. Highly recommended.

Back to the reason for the stop in Eugene. Caroline was singing in the choir at the performance of Elijah by Mendelssohn. The overall performance was great and it is always special to attend a performance where a friend is personally involved and/or performing. Steve, and Gretchen, and I had great seats on the floor in the center of the auditorium. Afterwards, we met up with Caroline and she invited us to the after-party. At the party we also met up with another friend, Luc Kliner (Luc I hope I spelled you name right). He also sang in the choir that evening.

So that was it. A very full day. Onward to Cannon Beach now.